The stereotype is that Germans are efficient, reliable, rule orientated and precise. This is certainly true for the amazing transport system here in Berlin and for the speedy way groceries are passed through the checkout. It is also true when you arrange to meet with somebody – being a couple of minutes late is not cool. Following the rules (which are largely unspoken) is also important. As a new immigrant I quickly learnt that riding on the footpath is a no no, the evil glares also inform me that crossing against the green man is forbidden. Tardiness in packing my self-provided supermarket bags initiates a pen taping display from the person at the checkout and irritated shuffling from those waiting in line.  Also, if I somehow forget to buy extra groceries on a Saturday I am guaranteed to starve on Sunday because why would a supermarket open on a Sunday?

All of this order seemed to be thrown out the window on our recent visit to the immigration office. It was a supposedly simple process. Shosh is a European citizen thanks to having an English Mum (nice one Colleen), Amaya and I automatically get family reunion visas anywhere in Europe for as long as Shosh chooses to stay there.  We were issued 3 month residency permits by the German consulate in Sydney and were told to go and find Frau Püschel upon arriving in Berlin to have them extended.

So off we set on Monday morning, arriving at 8am – not an easy task with a toddler. The office was conveniently located in the middle of 3 stations, but close to none of them. It is a drab, foreboding building, set against an industrial landscape. Grey was definitely the dominating colour of the whole experience. 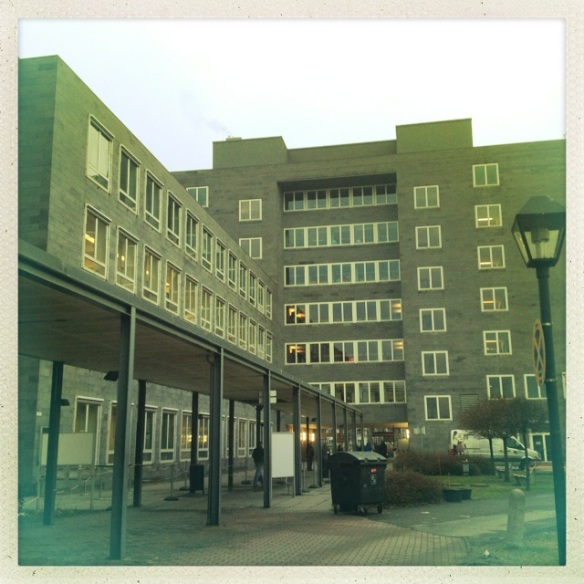 With no obvious information point, closed doors everywhere and everything in German, we spent a confusing hour just trying to work out where we needed to be, being told that we were too late to see anybody that day, and then finding out from the people in the waiting room that to have any chance of seeing anybody we needed to be at the immigration office by 5am at the latest!

The following day I dragged myself out of bed at 3.45am, caught a deserted train to Westhafen, and then jogged a freezing kilometre to the Ausländerbehörde (immigration office).  Believe it or not there were five other people already standing in line at 4.20am!  And so there we stood, wordless, in the darkness and the cold. 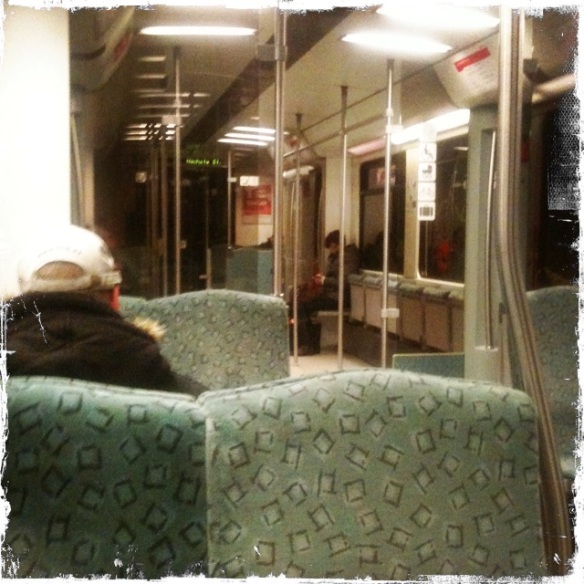 Can’t believe there were actually a couple of other people on the train at 4am!

The view when I first arrived.

The lights finally came on.

My estimate is about 200 people behind me by 6am.

People trickled in slowly, so that by about 5.30am there were over 100 people behind me.   Flood lights eventually came on and the staff started to enter the gates in front of us, getting ready for their 7am start.  Most of the staff barely acknowledged us as we stood there shivering.  The girl behind me was visibly shaking.  It was hard to believe that this was Germany, supposedly one of the most developed countries in the world.  There we were, obligated to stand in line for two and a half hours, before dawn, in the dead of winter.  Hardly a dignified act.

Finally, at 6.40am the gates opened and we were marched into a small room where I was issued a ticket with a random number on it.  The lady informed me, in English, that I was second in line and that Shoshanna and Amaya had better hurry up!  Which they did, arriving minutes before being summoned to room 172.  Shoshanna had also run from the Westhafen station, pushing Amaya in the magic buggy.

It was a big physical effort for everyone involved, but the end result was a prompt issuing of a 2 year residency permit for Amaya and I.  We celebrated with a visit to the Balloon Cafe! YAY!

Amaya waited very patiently. At one stage she asked when we would be getting on the plane. Obviously a similarly boring waiting experience for her.

Keeping Amaya entertained with one of her most favourite pastimes.

4 thoughts on “Life as an Immigrant”